Last game of escalation worked out very well, for me; giving me my first win. The MVP of the army was, without a doubt, the Squiggoth; seen in WIP 7. Chomp Chomp, as he is now known, chewed through two leman russ tanks, one shotting each. With such a stellar performance, it needed a second act. I couldn’t do a repeat of the project, nor was I a fan of the basic squiggoth from Forgeworld. Thus Meka Squiggoth was born. 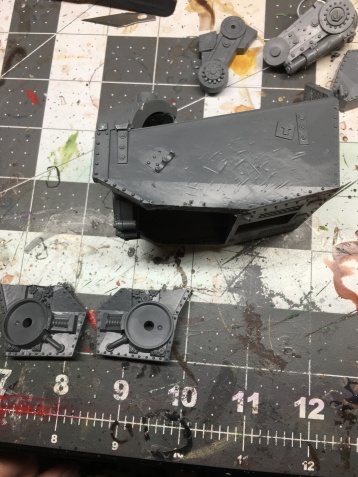 I started by assembling the bottom half of a Gorkanaut. This would act as the main body of the Squiggoth. The hip joints were sawed off to make a flush edge on, what would eventually become, the bottom of its body. These joints would come in use later, so I set them aside. 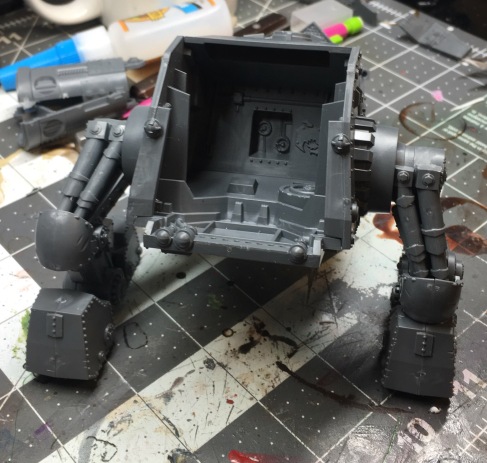 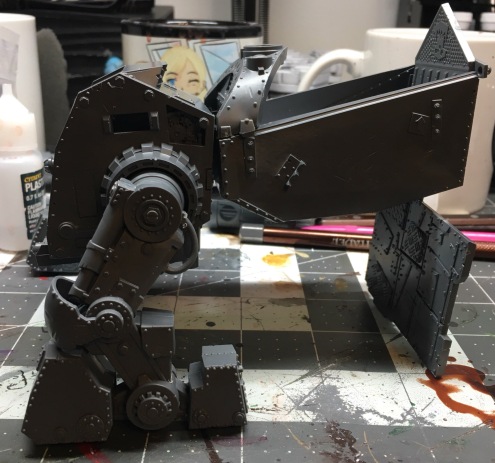 The head of the gorkanaut kit would be used as the head for this project, as well, only inverted  so The cavity is facing forward. I assembled the legs, slightly repositioning them, and glued the two pieces together to show roughly how the beast will stand. At this point, not a whole lot of modification had been done, having only needed one gork kit. I knew, at a minimum, two would be needed, just to have the legs. 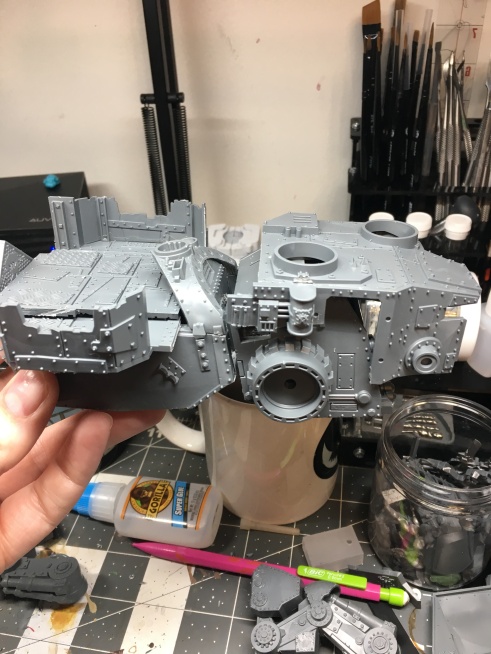 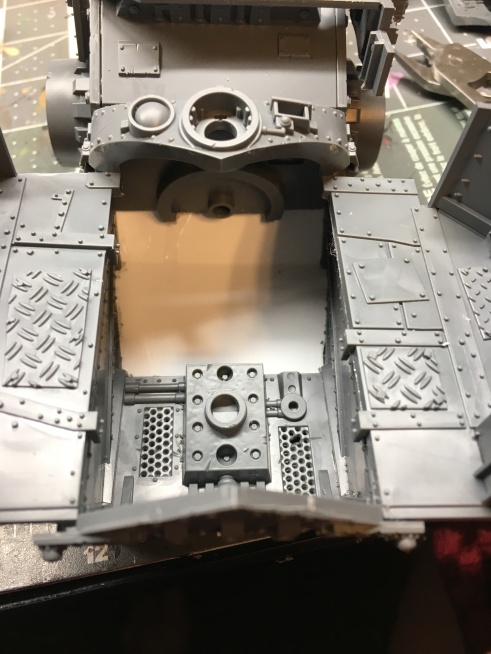 Next on the agenda was the back. Using the battlewagon kit, I fixed the outer edges of the flat bed onto the edge of the body, making it much wider than a wagon, and added the side plating. Trimming up a truck bed, I set that on top, leaving it unglued, so I could reach the cavity later. Underneath the beast, I cut and glued plasticard to plate up the gap created from removing the hip joints. For the head, I assembled the front cab of the battlewagon, minus the grill, and cut off one side of the door so it would fit around the leg joints. 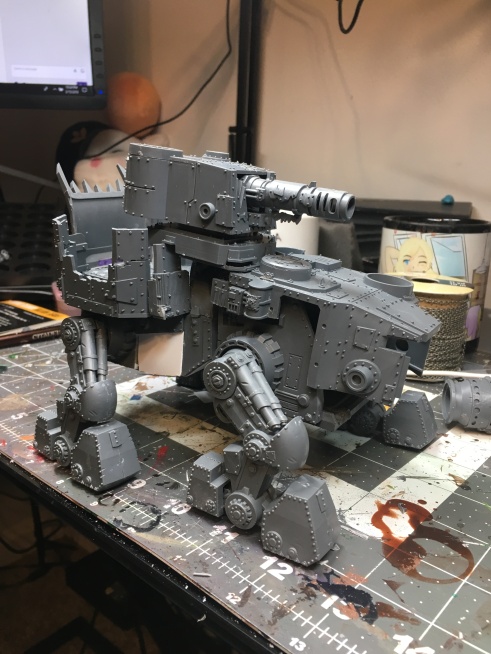 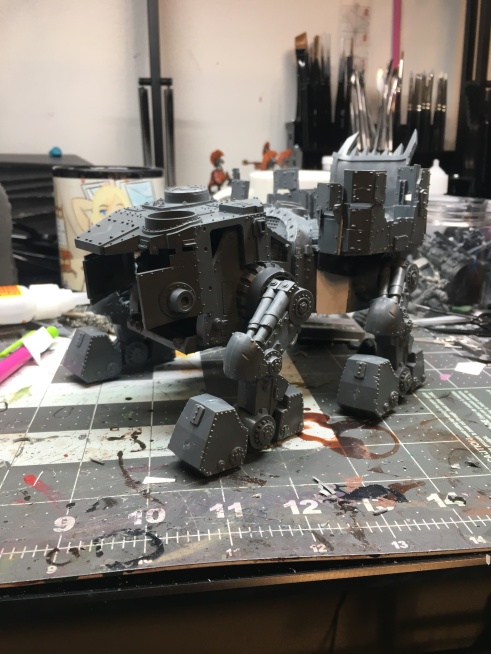 I trimmed off all the extra bits on the body, making it flat, and fit on the hip joints toward the rear of the beast. Using plasticard and the guards for the hip joints, I built around the area to hide the raised edge created by this addition. I also started looking at ways to mount a turret kannon, assembling it straight from the battlewagon kit. 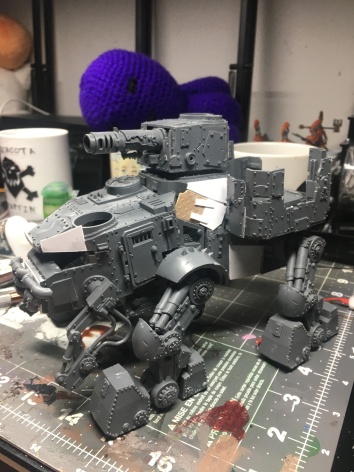 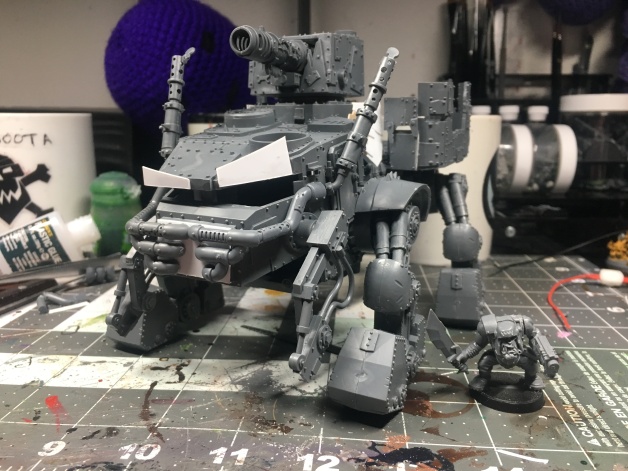 Adding the grill, I trimmed down most of it to make way for a plasticard covering. The exhaust work came from the dakkajet kit and was made to wrap around the head into large pipes; note that the trukk exhaust used would later be replaced by the battlewagon kit’s. The turret plate for the wagon kit was cut to fit between the cab and bed, plasticard plating covering the gap to look as built on. Doors were also added, trimming then in an arch to sit snuggly around the added shoulder guards. Lastly, the beginnings of the jaw was started by adding the left over deff rolla hinges from the Colossal Squig’s bit; never toss away your scraps 🙂 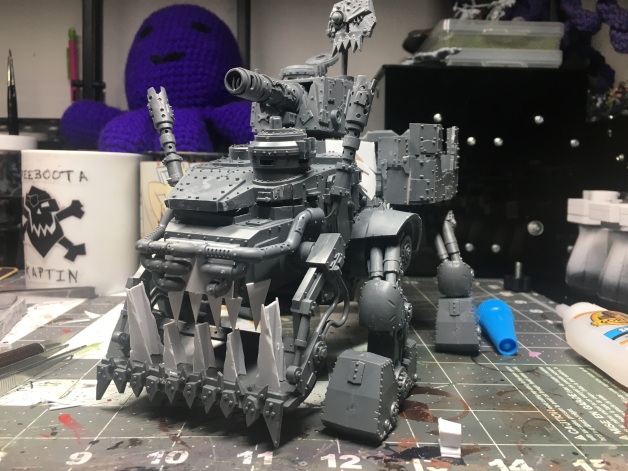 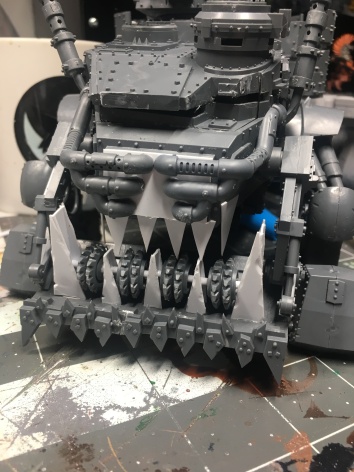 Things were starting to really take shape at this point. The bottom of the jaw was fashioned from an old leman russ dozer blade that I had in my bits box. Lining the bottom lip are the front pieces from two trukks, cut to line up. Top teeth were forges from plasticard and glues into place, while the bottom teeth were glued and trimmed onto plasticard girders. saw blades from the Goliath kit were placed in twos and glued onto plastic rod, which would be secured between each tooth for added grindy killiness. 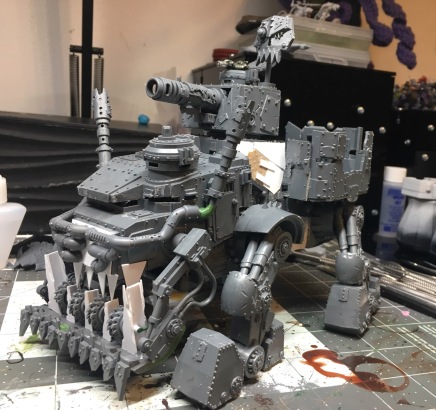 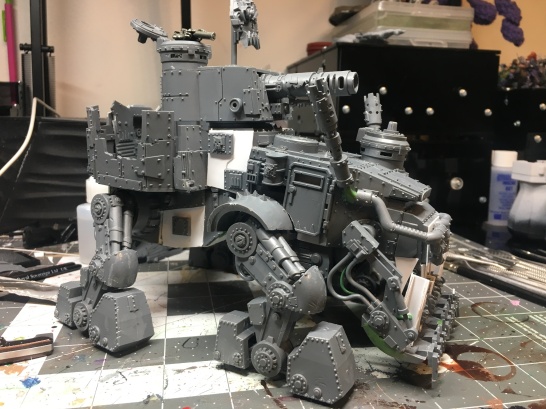 All that was left was some glyphs here and there, wiring up the grinders, and overall gap filling. Now Meka Squiggoth is ready for rivets and paint; just in time, as escalation is less than two weeks away :O

Thanks for reading! As always, please feel free to ask on anything I may have missed covering, as well as any comments 🙂

Next post we will take a look at this big boy all painted up and possibly our next two monsters to come. The meks have their hands full, for sure!

See ya next time