I recently entered into the Games Workshop local Age of Sigmar Duel painting competition. I had never actually done a painting comp before, and always wanted to get into them more as a fun push than an attempt to win. The idea of creating a display piece from characters seemed fun. I saw it being a nice break from my usual projects, and a chance to play around with basing; something I am always the first to admit isn’t my strong suit.

I immediately knew what I would work on: I had recently done up a darkoath warqueen and thought it would be great if I pitted her up against a Neave that I had been wanting to paint for ages. The whole thing had to be on an actual Games Workshop base, so I would have to find something that would allow the most dynamic scenery I could muster. 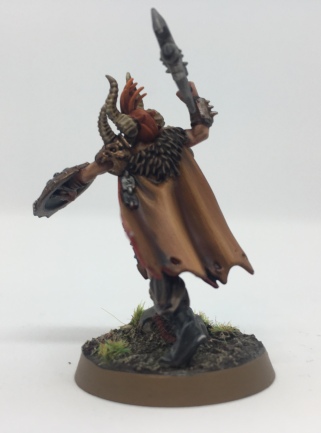 The warqueen was done up in the traditional colors. I used a doombull brown, druchi violet, mournfang brown, skrag brown progression on her cape. Reds were my traditional Mephiston, Agrax, evil sunz, wild rider and the bone was just zandri, agrax, ushabti, and screaming skull. Her hair was squig orange, carroburg crimson, followed by troll slayer orange. 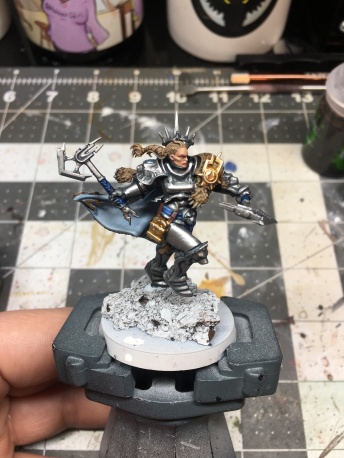 I used a true metallic metal technique on Neave to acheive her armor. She started with a base coat of 50/50 Abyssal blue from scale 75 and Leadbelcher. The blue grey from the Abyssal would prove a nice tie in  to the other blue pieces on her as I moved forward. Next I did a 3:1 Leadbelcher to Abyssal, then straight ledbelcher. The whole time, as I am gradually highlighting, I am keeping in mind where the light hits her to create a natural looking shine. Next was a 50/50 ironbreaker/leadbelcher and then straight ironbreaker.  This was the start of the super shined areas. Lastly, used Stormhost Silver on the brightest areas of her armor. The last step was an edge shading of my base coat in the recesses.

Her hair was a blonde progression similar to how I do bone, but instead of Agrax I used Seraphim Sepia. Fenrisian gray, drakenhoff nightshade, back to fenrisian and then celestial grey made up the inner cape. 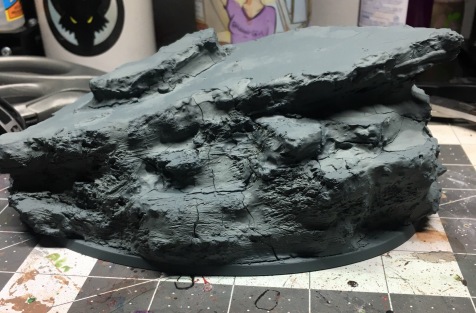 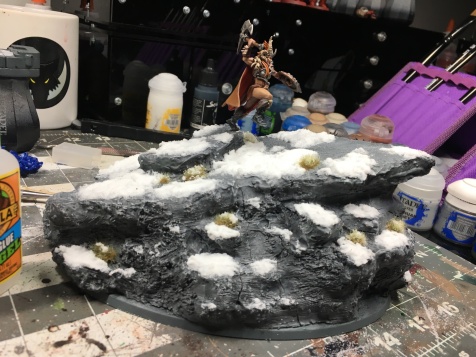 The base itself was nothing but cork that I cut, shaved, and stacked onto a gorkanaut base. Once glued, I took crayola clay and thinly applied it over the entire thing, making a complete mess! Once it dried (about a two day dry time) I sprayed it with Mechanicus Standard gray and went back over it with the same color, by brush, to get a solid even color. I washed lightly with Nuln oil and then drybrush highlighted with dawnstone and celetial gray. Valhallan blizzard was applied for the snow tufts, with snow flock sprinkled on top, while wet, to fluff it up a bit more. I added middenland tufts throughout the base, at the end, and added some snow in them. As you can see, I was so excited, I didn’t even get a finished pic of the base before I mounted the Warqueen. 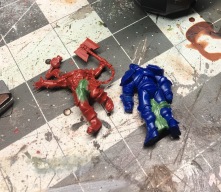 The base needed something else. It seemed a little bare with just the two fighters atop it. Using some spare Shadesipre minis, I created some casualties to spread around; one for each faction. I had to chop them up and use greenstuff to reposition them, but all in all they worked great.  Once painted I glued them on to look as though they had been slain by those remaining standing.

And with that the display was done!

It was an extremely fun project to work on. I am very happy how it turned out… and at the final results!

Thanks for reading! Please feel free to leave any questions or comments. See you next time! 🙂