Like many in the gaming community, I was ecstatic when news dropped about Necromunda’s release. I was an avid player of the original, playing mostly Escher and Redemptionists. I truly loved the look of the models when I saw the new box but, as per usual, wanted to find ways to make them my own and to have them stand out from the basic kits. I finally got my hands on a box on release day and quickly set to do just that.

I started with my leader, who in my mind should be the most flashy model to stand out from the rest. Having done multiple female builds at this point (with write-ups coming, super promise) I had a few options, when it came to bits. My eyes focused on the Age of Sigmar Sorceress model, having picked one up a while back to use for my Amazon team created from witch elves. I thought she could work nicely as a thrower at the time, but slowly the idea faded and she waited on the Warhammer Quest character back burner. The extended arm would work well for holding a pistol out, I had thought, so I started dicing her up and came up with an initial outline. The torso, once sawed off from the Sorceress, lined up perfectly with the Escher legs that were freed from their host. I had wanted to do a segmented leg, to give a different boot look, but the idea didn’t fully pan out and I went

with the traditional leg for that portion of the kit. I used some greenstuff to do any minor gapfilling needed in order to join the two halves together. The extended arm was simple; I just cut the sorceress arm off at an angle to line up with the end of the glove. I was already falling in love with this pose and it started helping in fleshing out who this person was and what this gang would be like. I envisioned this woman staring down her plasma pistol completely relaxed and uncaring of what layed on the other end. The pose, with head tipped back would lay the foundation for the next ideas to pop in my head; the face. Fortunately, the faces for all the witch elf models are separate from the heads. They are far too angular for a human look, something I ran into when making my Amazon team. I needed something that would work well with this pose and this build. Fortunately, I didn’t have to look far. I had purchased some female heads from Victoria Miniatures to be used for my Sisters of Battle; the Guthrie female heads, to be exact. I had bought them after I learned that Armies on Parade did not allow 3rd part bits, so I had to find another solution. From these heads, I found the perfect head for her.

The head was smiling, which I thought was a fantastic addition. Now I had this gang leader grinning as she eyes her target. I quickly thought of this mentally deranged gang who were escapees from a penal world, which was building off the generic penal inmate idea I originally had. I wanted to make them look unstable and give some looted gear, like it was lifted off from imperial guards during this escape. I was also leafing through the rulebook and absolutely loved the look of the Belladonna character art they put in there. It became a partial inspiration for where I headed, deciding I wanted a feather headdress for my leader.  To build, the head was cut and filed to fit the head with hair being glued in place around it. I had to file down both her chest and the cadian plate piece heavily but after a bit of work, it fit. I also gave it some bullet holes; the blows she would have given the poor guardsman she took it from. The feathers would come from the Tzeentch Acolyte kits. I had them on hand, so it was an easy grab in order to get feathers; nine total. I made a crown from the iron halo from Saint Celestine, as I had a spare sitting around, and sat it overtop the feathers already in place. After the crown, everything else was downhill; a powersword clipped from a Sisters of Silence kit was fit onto her right hand and then I used greenstuff to sculpt the back piece for the vest. I decided to add some scarring on her right cheek and neck, to make her a little more weathered as a ganger. The result: 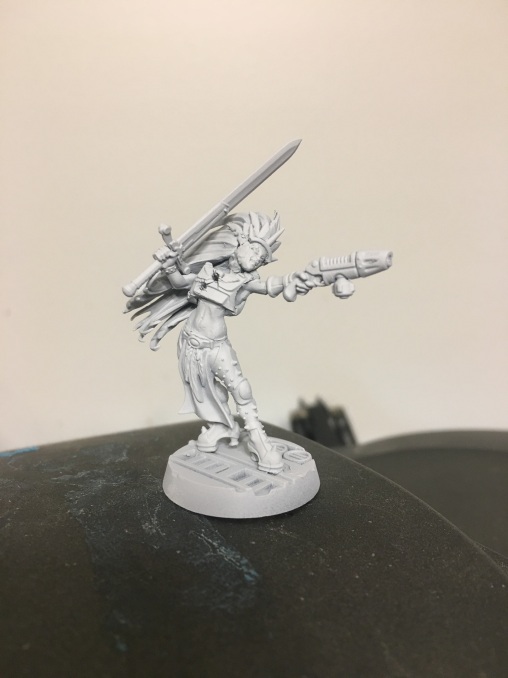 A really fun build that took me about three or four days of work to do. I cannot wait to get some paint on her. We have ten others to build, however, which I will show you in part 2. Thanks for reading 🙂