Last post, we saw what went into making the first piece I completed for my 500 point escalation army; the ork trukk. What is a trukk without some boys, though? I was biding my time, waiting for the holidays to end, so I could do some massive ork buying. That was when my #plasticfriends at my local Warhammer store surprised me with this! 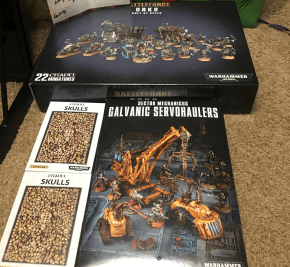 The ideas that I have, for all of this, are far too many to go into detail here (and I don’t want to give spoilers! You are just going to have to keep reading my blog :P).  The battleforce is amazing for my project, being literally a kult of speed box. The skulls will definitely come in handy, as you will soon see, and the servohaulers… that is for another day 😉 We will discuss the boyz first, as they were a fairly simple build to do, have a lot of personality and turned out great for this project. 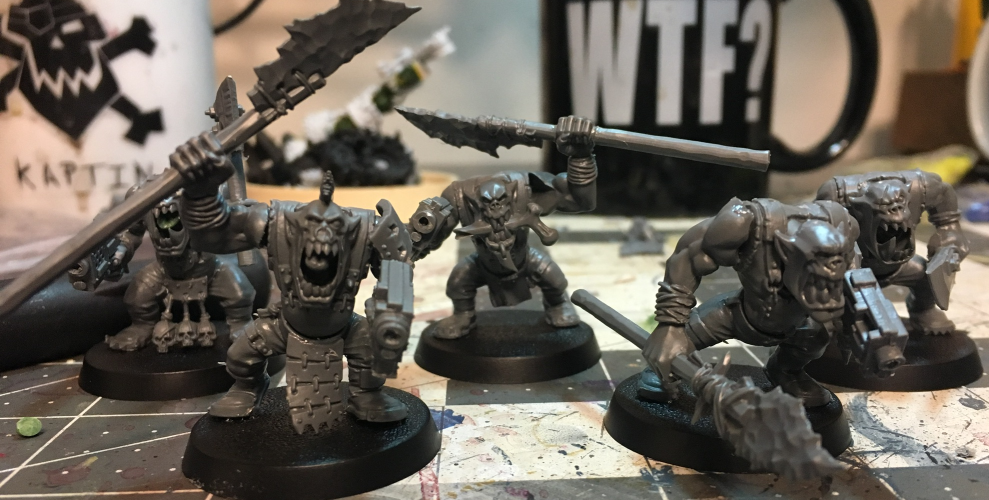 The first five assembled can be seen above. I took a page from my freebootaz and used savage orc heads. I was able to cut the tongues off, for some, though most were used in my freebootaz. The rest I had to sculpt with greenstuff, as the empty mouth looked odd. I also used arms from the savage orc kit, giving some of them spears. My thought in this was to outfit them with things to throw from the back of the trukk. Rules wise, they will just be choppas, but I thought they added a bit to the character of these orks. While having vehicles, I wanted to paint a picture of borderline savage orks. I imagine this tribe on a world like Gorkamorka, working with a bare minimum amount of technology. The orks on the left received loin “cloths” from the nob kit, and the front most received a Mohawk from the Necromunda Goliath kit. 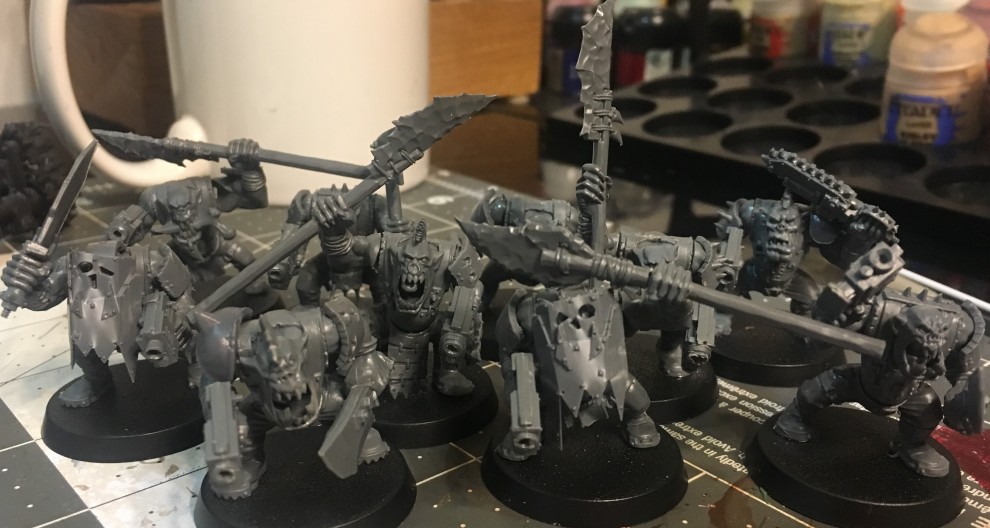 I fleshed this group of ten out even further when working on the last five. More spears were brought in, plus some plating for their arms (from the nob kit). Another Mohawk was fashioned, this time from the back spine of a bloodletter.  I had some black orc shields that I thought would make great masks. I added them to the heads of two orks, using the thin plates from the nob kit as a top strap. All boyz went on 32mm bases. The stances they have just are too wide for the 25mms they come with. they look silly on them, compared to the 32mm bases.

The bikes I did up were fairly easy and straight forward, as well. Most simply saw a swapped out front. The first three bikers can be seen above. The chassis are all the same, using the core warbiker box, for these. The main change is the use of Deff Dread bits for the front. Each one came from that kit, which I now feel works perfectly for bikes. The bosspole for the Nob biker also came from that same kit. Bodies and rider arms on the regular bikers are from the normal bike kit. The nob biker arms came from the Nob kit, while the head is from numerous areas. The main head came from the flash gitz kit, while the gob was made from 3 separate pieces, cut from the shoulder decorations from Orruk brute kits. The spike Mohawk was fashioned from spikes on one of the ork boy kit shoulder pads. 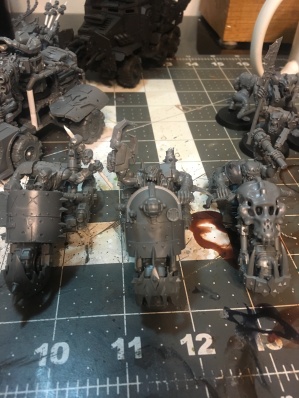 More Deff Dread bits went into making the second set of bikes, utilizing the shoulders this time. The rounded piece from the servohauler grill, used for my buggy (which will have it’s own WIP writeup) was filed and placed ontop of one deff dread shoulder, while the other bike received two placed together. The third bike receive the top portion of the big clawfiend  skull from the skull kit, which later received jewelers chain to make it look secured. The spears were fashioned using thin plastic rod and skulls from the skulls kit. Using a pin vice, I drilled holes into the top of each skull to allow them to slide snuggly onto the spear. The tips of the spears were just whittled to a point with a hobby knife.

Next post I will be going into the last bit of my 500 points; my scratch built warbuggy. Until then, thanks for reading