Disciple of the Witch 1- Kingdom Death

I wanted to do something big this time around, for the 1000 point/round three of escalation. I figured it would be another battlewagon but what ended up happening was something completely unexpected.

This is the story of my “Counts-As” Squiggoth.

I first started with a plague furnace, building the frame just like the kit calls for.

I trimmed the spikes off the front and back, as well as cleaned up the rope, stone and other non wooden parts to create this frame. I wanted something even more feral looking than the rest of my army. I envisioned a cart, maybe scraps from a previous wagon that had an explosion and was repurposed. Perhaps something even pulled by an animal…

I had to trim the bottom of the posts to allow the battlewagon platform to slide through. Once added, I build the back like a regular ol wagon, plus some paneling to fill small gaps. I trimmed the side panels to fit the back, allowing the treads to fit on, and the front wheels were attached in place of the wooden plague furnace wheels.

I cut the front off, and added some more side plating from a separate wagon kit. The large wooden triangle frames came from the warpfire cannon kit and simply lined up and were glued in place. At this point I was firmly invested in a pull cart wagon. All it needed now was something to pull it.

And that something was this…

The Colossal Squig! This thing is really big… a lot bigger than I anticipated actually. I was starting to rethink this project, from just a battlewagon. Assembling left quite a lot of gaps, so some greenstuff work was needed to blend the skin on it. 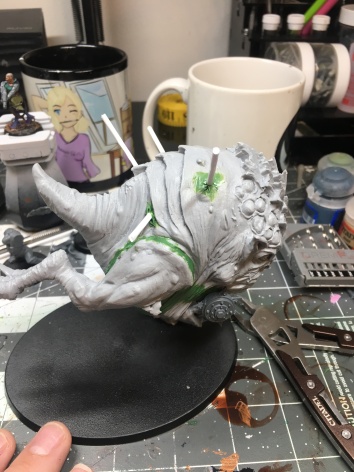 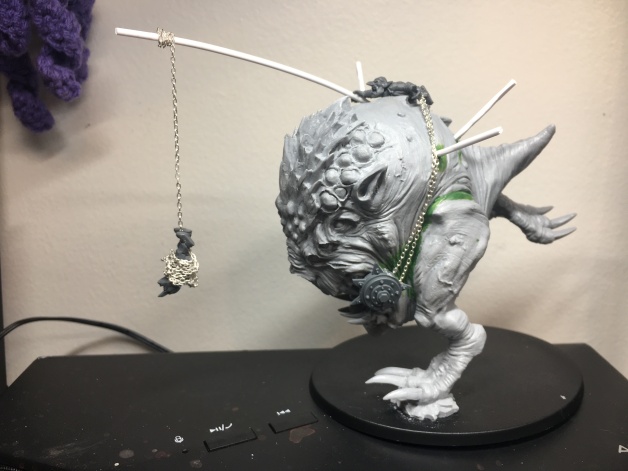 I imagined something this size would be an ordeal to tame or wrangle up, so I added things to reflect that. I drilled some holes and, using plastic rods, drove spears into the sides of the Squig. These would end up being fairly crucial to the orks, as a way to strap the beast in. Now he just needed a steering mechanism. I chose to use the good ol carrot method for his motivation, adding two grots; one on top holding a pole made out of plastic rod, and another acting as the poor carrot, bound up in jewelers chain. I made a bit from the outside part of the Deff Rolla and some plastic rod, then securing it (and the grot on top) onto the beast with more jewelers chain. This saw the assembly phase complete.

Gums, tongue, and sacks along the head were done in the same pink progression; Screamer Pink, Carroburg Crimson, Pink Horror, then a light highlight of fulgrim pink in areas. The bone plate is where things got interesting, as far as a recipe goes. I started by washing a base of Dryad Bark with Druchi Violet.  Highlighting from there went as follows; 50/50 Dryad Bark+Xereus Purple, 50/50 Dryad Bark + Genestealer Purple, 50/50 Gorthor Brown + Genestealer Purple, Baneblade Brown and finally some Screaming Skull.

The rest was fairly straight forward for the metals and grots, who saw paint schemes just like the rest of the army thus far. This was a very lengthy paint project but very fun and challenging. With that done, I turned to the wagon. I won’t go into length on the process used, as it is the exact same as my other vehicles. The only difference is the addition of wood. I used Mournfang brown followed by Agrax Earthshade as a wash and Skrag brown, followed by Deathclaw brown as highlights. 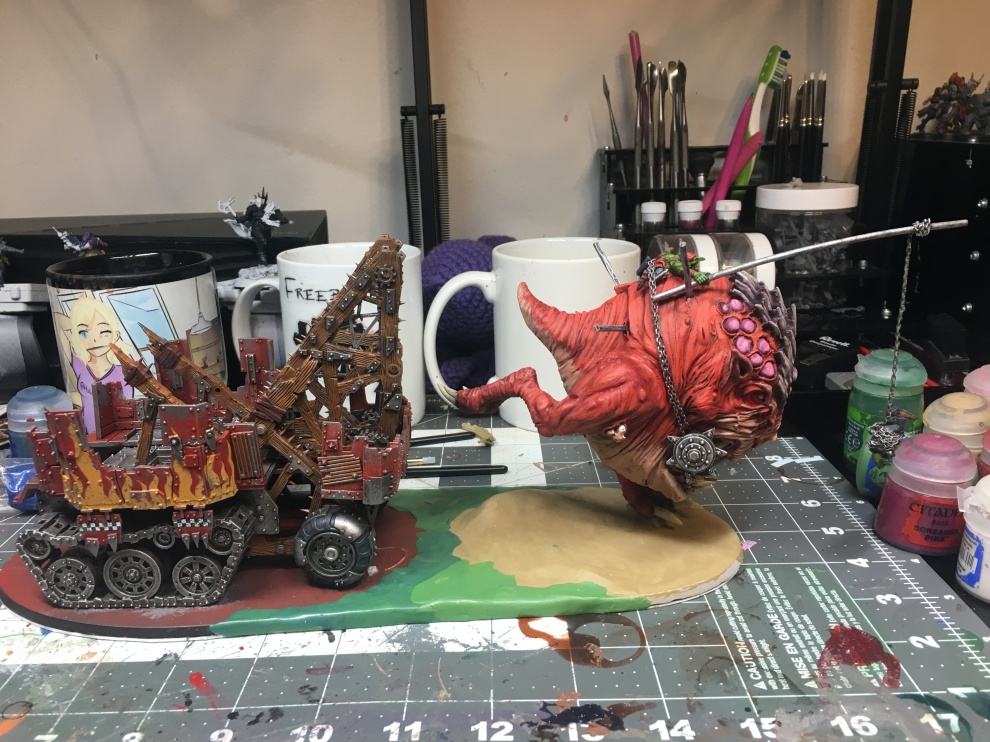 You can see the finished wagon above. Now all that was left was attaching them and the base. I started by gluing them both, end on end, to an 8×11 piece of plasticard. Then, using a ruler (one of the plastic measuring sticks from Necromunda to be exact) as a guide, I left some card on the edges in between them, to create a slightly misshapen oval as the front base is smaller than the back. Using greenstuff, I then gapfilled to level everything out and sanded the edges to match the edge of the bases.

I added more chains, painting them like the others, to connect the two. Basing was simply a basecoat of Baneblade Brown, a covering of Agrellan Badland, a wash of Agrax Earthshade and then Tyrant skull drybrushed across the whole thing. Rynox Hide went around the edge to finish this massive piece off.

Here is a Battlewagon lined up side by side, just to show the Squiggoth’s footprint.

Words can’t express how happy I am with how this turned out. It has turned into an awesome game piece as well as a nice display piece, and has fueled my desire to create even more large orky items. As a side note, he performed amazingly on the battlefield. He chewed up and ate two Leman Russ and helped me win my first victory!

Thanks for reading! I am already planning on my next wave, for the 4th match of escalation; bringing me to 1250 points. The wagon above might be getting a nice loud upgrade and perhaps a new friend to join in the feasting of tanks! All of that will be coming soon.